Today’s interview is with our very own show host Marti Dumas. (Yes it’s true – I forced her!) Marti’s books are indie published through small press Plum Street Press and include JALA AND THE WOLVES, and JADEN TOUSSAINT, THE GREATEST series of which there are four books (The Quest for Screen Time; The Ladek Invasion; Muffin Wars; and Attack of the Swamp Thing) and her newest release JUPITER STORM. 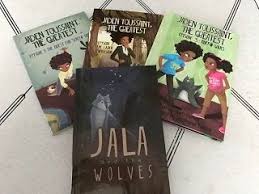 Marti has sold over 50,000 copies of her Jaden Toussaint series. Here’s how she did it: